Are notes tied to images?

Those are good questions!

While designing Tropy’s UI we have put have a lot of thought into the correlation of notes and photos, but we are still working on a final verdict on some of the issues involved. This topic becomes slightly more complicated with the addition of ‘Photo Selections’ which we are about to release with the next beta (scheduled for this week): basically, this allows you to select a part of the photo and attach individual metadata and notes only to that part. If you have a photo with multiple ‘selections’ and attached notes (e.g., transcriptions) it would be very confusing if activating a selection would not automatically bring up the corresponding note (and vice-versa). For that reason we’ve decided to always link photos (and selections) and notes.

In other words, yes, there is currently no way to open a photo while showing a note that ‘belongs’ to a different photo. We discussed a few ideas that would allow you to detach / re-attach notes from photos but have not found a solution yet that would not result in confusing UI.

Having said that, this discussion has not been closed and we are very much looking forward to the beta with photo selections, specifically, because it will allow us to try out the UI with multiple photos, selections and corresponding notes.

Obviously, it is a big help to learn about your experiences and use cases to inform this discussion. For example, we made the assumption that, when transcribing a multi-page (multi-photo) document, you would create multiple notes, transcribing each photo’s content. Once everything has been transcribed you could then copy all the notes into a single one if you prefer to have the text as a single note (but thereby losing the individual associations of photo and text).

Thanks for the feedback regarding the note pad: we are still working on the issues regarding focus and cursor position that you mentioned.

When using undo/redo in connection with notes, please be aware that the undo/redo works slightly differently depending on whether or not the note is currently active: if the note has the keyboard focus (i.e, because you’re typing) undo/redo will undo only the most recent keystrokes, whereas if you leave the notepad and issue an undo all the most recent changes to the note will be undone in one batch.

Having to transcribe each page of a letter individually, and then copy and paste it into a single document, takes away a large part of the advantage of tropy for me. I might as well continue to transcribe in an external editor. I can see that in some instances, a new note for each image might make sense, for but 2-6 page long, chatty and/or diplomatic letters, it’s counterintuitive to break it up.

It would make more sense, to me, to allow people to make multiple notes per item, linked to images or not, especially if notes might well be about the item as a whole rather than the individual image.

Thank you for the heads-up about the undo/redo - that is worth putting in the documentation for notes!

I’d agree with the post above, that having multiple notes for a multi-page document defeats the appeal of something like Tropy. For researchers who have to transcribe hundreds of documents, copy and paste on that scale sounds terrible.

I work on handwritten manuscript books, (town registers), which might require hundreds of photos for the whole book. However, I need to work with entries in these books as discrete items, so one photo can include multiple entries, and equally, one entry can span across multiple photos. At the end of the day, ideally I want one note per ‘source unit’, and that rarely conforms to ‘one photo per source’. Unfortunately!

Just to follow up on this, it’s clearly one of the main goals of Tropy to attach metadata and notes per ‘source unit’ – regardless of whether that unit comprises multiple photos, a single photo, or parts of a photo. We have been (and still are) considering item-level notes (which are not tied to a specific photo) but that creates a number of UI problems which we’ll have to solve conceptually first – your input is very valuable to us in that regard, especially in the beta phase, and something along the lines of what mebrett suggests above (being able to detach notes from a photo) is probably the way to go.

What I’m mainly concerned about is ensuring that Tropy can show the relevant note when selecting a photo, especially if you have multiple ‘entities’ of interest on the same photo (I’m attaching a screenshot from the current dev build below to help illustrate this point: here I have two lists which I’d like to transcribe separately; if I select one of the lists on the photo, I naturally want the corresponding transcription to show up automatically). 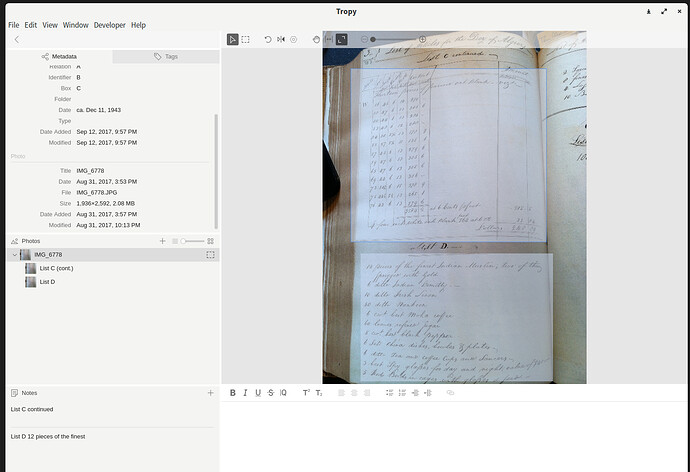 Finally, something to think about: we’re still trying to figure out best practices ourselves, but given a manuscript book with hundreds of pages, I’d like to point out that instead of creating a single item for the whole book, it may also be a good approach to create items for each ‘source unit’ (which might comprise one or more photos) and use a list to combine all the items of the book.

I just want to chime in here that I agree with mebrett about the desirability of having item-level notes. Maybe the best would be to combine the selection tool with note taking, so that you create a note for the item (your transcription) but link parts of the note to the selection of each photo. So that, as you’re looking at the long transcription of say, a 6-photo item, it indicates when, in the note, you move from transcription attached to photo 1, to transcription attached to photo 2, etc.
I also like mebrett’s idea that we could have multiple notes per item - thematic ones, for example. Notes could be titled so that we can easily see what the point of creating the note was. One would be called “transcription”, another would be “interlocutors” for a list of participants in the document, another could be thematic like “comments on X issue”.