This might be the silliest question ever, but would anyone be able to walk me through installing Tropy in its Linux 64 form onto my Chromebook? I’m starting an internship and need Tropy for it, but just have absolutely no coding competency whatsoever. I’m reluctant to post this as I know it’s a big ask, but I’ve been trying to figure it out for hours with no luck and I feel like if anywhere could help, it’s here!

Here’s what I’ve tried so far:

So that’s where I’ve got to

If anyone has any idea what I could try next to install Tropy, I would absolutely love to hear it! Please let me know if I can provide any more system information, or run any commands to check certain information, that might help clarify things or solve the problem.
Thanks for reading this far!! Apologies again for the daft post, and for being so coding-illiterate.
Cheers, Issy

The folder with Tropy-related files is actually all there is: the ‘installation’ is just to to move the folder to a convenient place and make Tropy known to your desktop environment so that you can start it by clicking on its icon. So this means that starting the ‘tropy’ file in that folder should actually just start Tropy. You mentioned that your attempt to open that file resulted in a pop-up – but how did you try to open it? I don’t know have a Chromebook myself, but I would guess that it might not be possible to launch binaries by clicking on them in the Files app. If that’s what you did, can you try to open the folder in the terminal and to start binary there?

If you’ve downloaded the tar.bz2 to your Downloads folder you could do this:

If Tropy starts, we’re good. In this case we should move the folder to more permanent location and I register the application so that you get a launcher icon and don’t have to use the terminal to start Tropy – these are the instructions in the INSTALL file, but I need to do some research to check if those steps apply on Chrome OS too.

If Tropy does not start, please post the corresponding error message. If it is something security/sandbox related, you might try the following steps right away (still in the new Tropy folder):

Or, if this doesn’t work then:
sudo chown root chrome-sandbox

And then try again to launch Tropy with ./tropy

Thank you so much for such a quick and comprehensive response, really appreciated!
Thanks also for clarifying on the ‘installation’ vs just starting Tropy. I did originally just double-click to open it like I would with a normal file, so that makes sense that it wouldn’t work! I also can’t seem to open that file in the terminal, so I went ahead with your other instructions

I moved the tar.bz2 into my ‘Linux files’ folder and worked from there as my terminal seems to find things in that folder the easiest. Happy that I got through so many of the steps! I did fall at the last hurdle a bit though as although I did the mkdir tropy, when I went in for that final ./tropy the terminal couldn’t find it again, and I got the ‘no such file or directory’ error message:

I then tried out those final steps you gave, even though I’m guessing it’s not a security/sandbox error, but still wasn’t able to run it. Would there happen to be any next steps I could take?

Thank you again for all your help. I’m definitely learning a lot!

This looks promising! So you seem to be able to start Tropy, however, at start-up a shared library is missing. Normally, you would install this using your distro’s package management system, for instance via sudo apt install libnss3 on a Debian-based Linux. How do you install system tools on your Chromebook? If you don’t know, try the command above and, if it does anything meaningful, try to start Tropy again (it’s possible that you’ll have to install a few more dependencies like this). 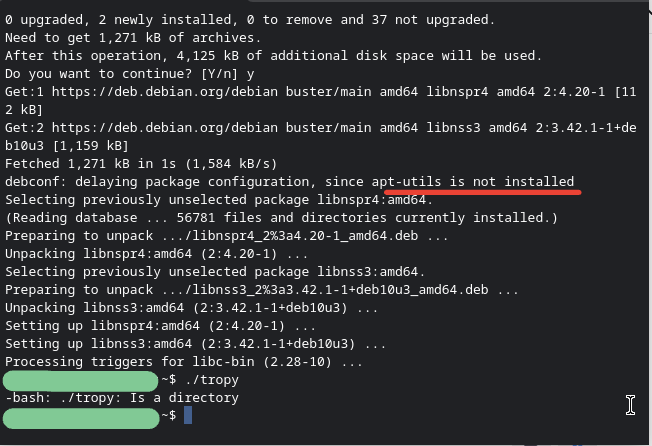 A whole BUNCH of stuff scrolled past when I put sudo apt install libnss3 in, and I got a different reply when I tried to start Tropy again, so it didn’t quite sort it but it’s definitely doing something!

I’m not sure how to install system tools, didn’t know that I was using Debian-based Linux but since that command did so much, I guess I am. I understand that -bash: is a kind of error message - so Tropy is now a directory (yay!) but not yet launchable?
Am wondering if this ‘apt-utils is not installed’ is the next thing to install?
Thank you so so much.

@fl00rb0ard thanks for the patience and enthusiasm you’re bringing to this! : ) Yes, we’re making progress here: your Linux is certainly using Debian’s package system, because installing the missing dependency seems to have worked.

The error message at the end means just that: tropy is a directory, so it seems that you were in the wrong place. Here are a few Terminal fundamentals that should help you figure this out: if you type ls (or ls -l for more details) you will see a list of contents for your current working directory. When you unpack Tropy one of the files is also called tropy. The command ./tropy assumes that you’re currently in the directory containing that file, that is ./ is the current directory and tropy the file in it.

If you unpacked Tropy into the tropy folder earlier, then I guess you’re just not in the right folder yet. You would do cd tropy first to change into the tropy directory, then call ./tropy to launch the Tropy file in that directory. Alternatively you could launch it from outside with ./tropy/tropy. As part of the installation process we’ll want to add Tropy’s location to your PATH environment variable, which means that you will be able to type tropy anywhere and your system will find the binary, but until then you need to launch it at its specific location. Please try that, then we’ll know whether it works of if you need to install any other missing libraries first.

I can’t thank you enough - definitely wouldn’t have made it this far without all your help!
Thank you for being so generous with your time, and so patient with such a newbie.
I have never been so happy to open an app in my life omg!

That’s great! So now that we’ve established Tropy works, let’s try to make it more convenient for you to use. First you need to decide where it should be located on your disk. Typically, every Linux distro has one or two places where third-party apps are installed, but I’m not sure if there’s such a convention on Chrome OS. In any case, this is essentially up to you – it’s just important that you know where it is, because if you download a new version of Tropy in the future you’ll want to completely replace that folder. To find out the full path to your current folder you can type pwd in the terminal, if you’re currently in that folder where the ./tropy command worked.

Once you know that path, you can configure the .desktop file that will hopefully let you add Tropy other Chrome OS apps on your system. In your Tropy folder, please find and open the tropy.desktop file in a text editor. Next, edit the two lines that say

Using the full path. For example, if you’ve installed Tropy to /home/fl00rb0ard/tropy you would change the lines to:

If you made these changes and saved the file, try the following back in the terminal:

The first command creates your the app launcher directory, in case it does not exist yet, and the second copies the desktop file to this directory. After this is done, try to see if Tropy has now been added to other apps on your Chromebook (not sure how this works, but I’m assuming there’s some kind of dock or window where you can see all the installed apps); if it isn’t restart the system, to see if the changes get picked up after the restart.

I can open it from the dock now, which is great. Does that mean it’s all sorted?

Basically, yes. You could try to also register the icons and mime-types as explained by the INSTALL document. This achieves that Tropy project files and templates should get their own icon, when you view them in your Files app and that you can open a project file directly (i.e., clicking on the project file opens the project in Tropy – as opposed to having to start Tropy then open the project file via the menu or by dropping it into the window). I’m not completely sure that registering as described will be sufficient on Chrome OS, but you can give it a try, though this isn’t crucial for day-to-day use of Tropy.

The only thing, really, to keep in mind is that when you update Tropy you just replace the entire unpacked Tropy app folder with the new one. You won’t have to update the .desktop file, unless you decide to move Tropy elsewhere.

Okay, that’s really good to know! I’ll take a bash at following the INSTALL document and see where it takes me. I definitely know where to come if I have any more questions!

Thank you so much (again!) for all your help.