Working with detail views of images, it would be fantastic to be able to link (better quality) images of a picture’s detail to the selection view in the item view. Whereas now if you mark a detail with the selection tool and you double click on the selection a zoomed view of the same image is shown, it would then be possible to display any image when double clicking on the selected detail – either single image files with high definition detail view, or other images that one could wish to link not to an entire image but to one of its details.

This is an interesting idea!

Normally, we would assume that you import the picture in the best quality and then zoom into your selections as required, but using dedicated pictures would save a lot of space if you’re interested in only a few details. Could you elaborate a little on your use case to help me understand it better?

Going forward, Selections are going to become more powerful (we want to make it easy to export the selection as an image, move it, resize it, maybe add custom metadata and so on). Since the selection is essentially a ‘virtual’ image right now, it would be very easy to, optionally, import your own ‘concrete’ version of the image. We could then render that image into the selection when it is active. On the spot, the only issue I can think of is that the dimensions of the selection should match those of the image, but we could enforce that. This way you could add selections, but there might be other surprising uses for this. For example, if we render the image into the selection layer that would also enable us to overlay/compare two versions of the same image.

Hi, thank you for your answer. All sounds very promising.

As the material I work with is basically visual (not text) (and my camera not being the best) I think the question can’t be resolved, even with very large image files. One example (see screenshots attached): from this engraving I took a view of the whole engraving and one of the detail of the picture which is important for my work: the group of sculptures on top of the arc. So I would want to highlight this group in the item view. As for now I can highlight the section within the image, but only zoom in in the selection view (for which the image quality isn’t sufficient, as you see), or otherwise switch to the second image, the detail view, but which is not referenced in the overall view of the engraving. Linking the different views through the selection tool could be helpful, especially if you have a lot of photos grouped in one item, and/or a lot of details in one picture. The latter is the case for art historical analysis, where the fonction of visually locating detail views in the total view of a painting / architectural ensemble etc., and being able to easily switch between them, could be interesting. 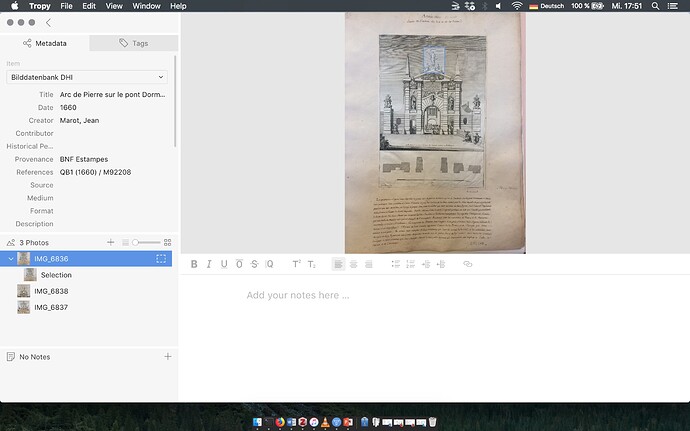 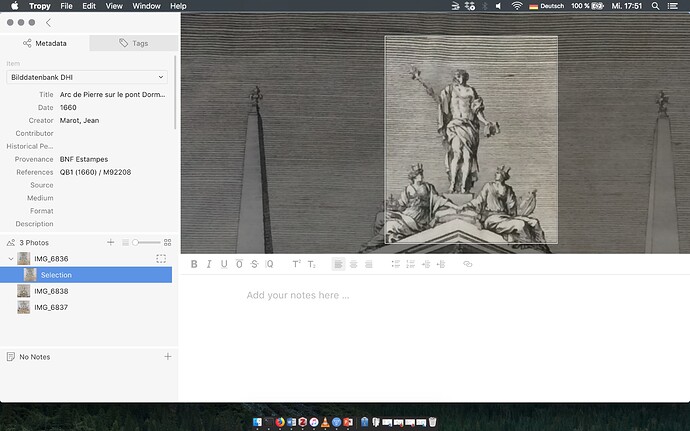 Bildschirmfoto 2018-10-10 um 17.51.53.jpg2560×1600 611 KB
The second case I am thinking of would be - still in image analysis, but I think it could be useful for written sources as well - establishing connections or links between different images. Let’s say you want to compare different treatments of the same motif (in my case, allegorical figures) in two different pictures, you could then switch between the detail views of the two directly, or also use the selection tool as a reference tool to other images (like a note that you post on the image, “see also…”, except that the image shows up directly).

The other use you are mentioning I didn’t think of, but this is fantastic! “if we render the image into the selection layer that would also enable us to overlay/compare two versions of the same image” This would be especially useful for formal/technical analysis in art history, but there are other possible scenarios where it could be interesting. So I am very much in favor of this. Also, adding specific metadata to selection views, as you mention, seems very useful.

I see the third screenshot was missing: 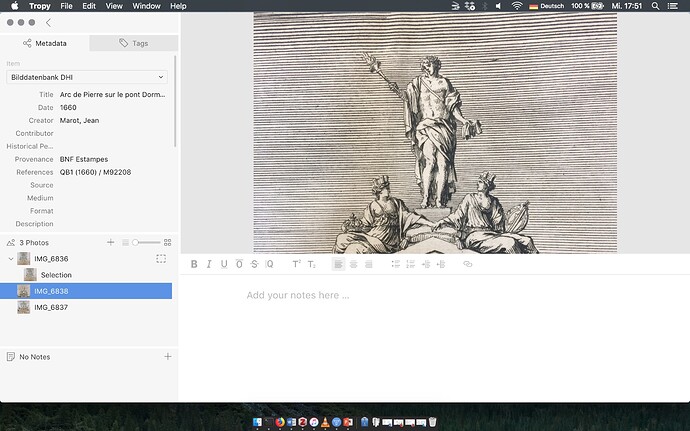 That makes a lot of sense, thanks. I’ll keep this in mind and I think that there is a good chance that we will allow using a separate image for selections.

Another echo for more flexibility with selections, though in a slightly different use case (but perhaps it presents a similar programming issues).

In the governmental records I work with, while many pages are discreet documents, there are also cases in which correspondence back and forth are captured on a single page. Sometimes as many as a dozen individuals in conversation w one another 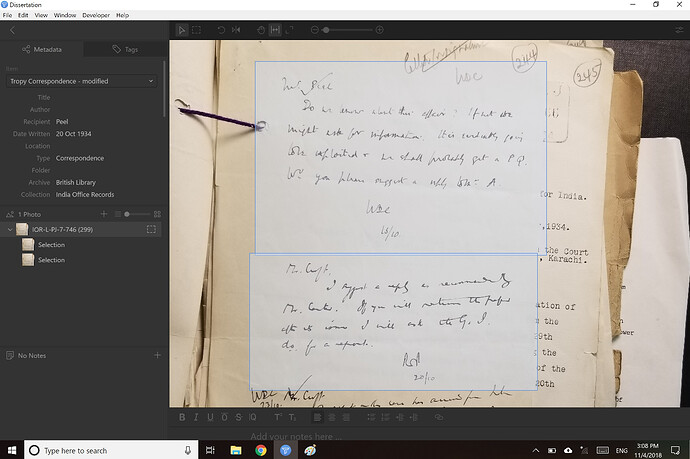 At present, while I can take notes on different parts of the image with the selection tool, I cannot have different metadata (or at least, I haven’t managed to do so). Importantly, I do not want to use duplicates of the photo for all separate and distinct items, but rather want to keep them nested. This is for a number of reasons, as, for example fact that sometimes as the authors are writing back and forth, sometimes the only way to know the recipient of a note is to see who was the author of the previous one further up the page.

We’ll definitely add a way to add your own metadata fields at the selection level.

Hi – just following up on your comment, inukshuk. Is there currently a way to move or resize selections? I’ve tried everything I can think of in the UI (right-click, modifier keys, etc.), and came across your comment while searching the forums and user documentation. Am I missing something?

Selections are a fantastic feature, and would benefit from more power such as the ability to adjust or correct or duplicate after entering notes. I use them to annotate screen shots and other new media images while preparing research and for lectures.

Many thanks for your excellent work!

Yes, sorry, modifying selections after creation is not implemented yet. It’s definitely on our roadmap, albeit with a low priority, so we’ll implement this at the next best opportunity.