When I created my project file, “EK.tpy”-- now reperesenting two years of work-- I did not pay much attention to its location. Now I want to move it to reside with the rest of the files relevant to this project. May I do that without confusing Tropy?

By default you can move around your project file independently of your photos (this is unless you’ve re-based the project to use relative paths). Before moving the file, make sure Tropy is closed (or at least the project is closed); after you move or rename the file, Tropy will not open it automatically at start-up (it may open an older project instead). That’s nothing to be concerned about, you can just open the project at its new location via File -> Open or by dragging and dropping the project file into the project window.

Thank you! The move worked, as you described.
Another question pertaining to reorganizing my folders. Excuse me if you’ve addressed this before.

I think you’re spot on regarding point one. Tropy, by default, stores your photos’ absolute paths, so by moving them Tropy will not be able to access them anymore. You can fix this, after the move, by consolidating the photos. If you’re mostly moving entire folders of photos, this should be very easy. This is explained in more detail in the user manual.

This is also the answer to your second question; if you make your project use relative paths, the photos will be found on all your synced devices. In the current release, making a project portable is not very user-friendly (you need to enable dev-mode in the preferences and then use the ‘rebase’ toggle in the developer menu). In the upcoming release we’ve moved this to the preferences, so it will be more straightforward. Here’s a sneak-peak at how this currently looks: 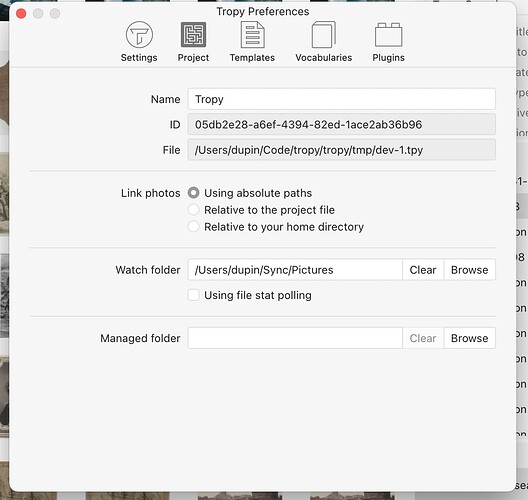