Hello - I started using Tropy a few days ago, and it is my new favorite thing! Thank you for developing it. I’m having a problem importing images. I create a new item, then I try to import, say, 40 images to that item. The first one works fine, but for the rest I get the exclamation point in the triangle. I click on consolidate photo and nothing happens. I close the program and restart it, and now all the images load BUT they’re all out of order (the file names are just numbers). I’m using Windows 10. Let me know if you need more info. Thanks!

Can you elaborate on how you imported the items originally? It sounds to me like you created an empty item first, then imported 40 photos into this item – is that right? If so, did you import the photos by dropping them into the photo panel, using the + icon in the photo panel, or via ‘Add photo …’ entry in the item’s context menu? I just ask in order to try and reproduce the issue. Also, you say that restarting fixed the issue, but is it possible that the photos were simply still being processed? If you import photos they will start showing up in the UI and, depending on the file size and, more importantly the format, the photos may not have finished processing. If you start using the photos actively, before they’ve been processed it’s possible for the warning triangle to show up – but in this case you can just ignore it until the processing has finished.

If you would like more control over how the photos are imported in the first place you need the be careful how you pick the photos during the import selection or, alternatively, you could import all the photos as full items first (e.g., by using the + icon in the project view toolbar) and then merging the items into one in Tropy.

Finally, during import Tropy will try to extract metadata from your photos. Additionally, the photo’s file name will be used as dc:titleby default unless the photo’s metadata already includes dc:title. If your photos end up with a value as dc:title which is not the file name then this is probably the case. You can opt to always set dc:title to file name, even if that means overwriting the embedded metadata in the Settings tab in the preferences window (alternatively, you can elect to write the file name to a property other than dc:title there).

Wow, thank you so much for the quick and thorough response. Yes, I created an empty item first, and then added the photos using the + icon in the photo panel. I was very careful to select them in the order I wanted them to appear in the item. The first screenshot is after I added the items and they finished importing. You can see that the first photo has a thumbnail, but none of the rest does.

Then I closed Tropy and restarted it. The thumbnails appeared, but now the photos in the item are all out of order. That’s the second screenshot. (I’ll put it in another post.) 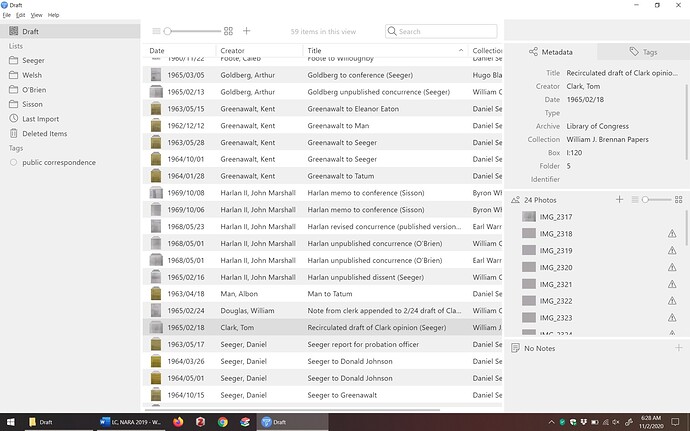 I understand that I can reorder photos in an item, but I’d prefer not to have to do that with multiple long items. Let me know what else I should try. Thanks for your help. 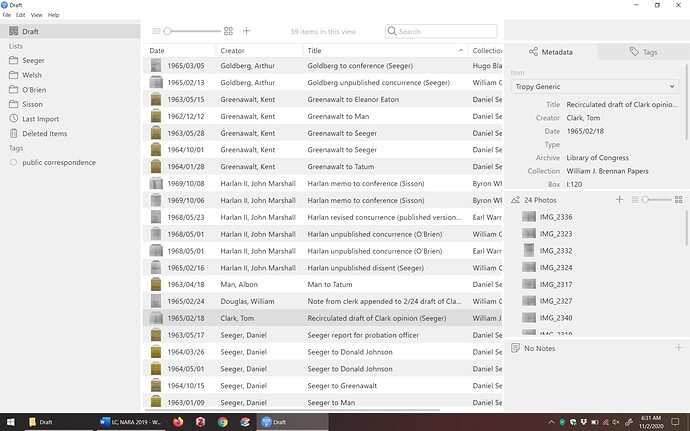 OK this is helpful, thanks! We’ll try to reproduce this and fix the issue with the next release. Controlling the order during import may still be tricky (as I mentioned it is contingent on the operating system’s file dialog) but obviously the thumbnails should show up right away and the initial order should be stable – so there’s definitely something not right here.

Long term we want to improve the UI to allow for searching/sorting etc. within a given item, but currently there’s only the stable order with the possibility to re-order the photos later on.

Just a quick follow-up: I can reproduce the issue, and this is definitely going to be fixed as soon as possible.

Meanwhile, you could try importing the photos as items first (you can use the ‘Last import’ list or sort by date added to quickly see the most recent import) and then merge the items into a single one. This gives you more control over the initial order as well: the order will depend slightly on how exactly you merge the items, whether it is via the context menu (in this case you’re merging the selection into the item you clicked on) or via drag and drop. Basically, if you merge via drag and drop, you’re always merging ‘into’ the item that is the drop target – so typically, you should drop into the photo that should be first; if you’re dragging multiple items then the item that you ‘pick up’ is always the first in the selection and all the others will be in the order in which they were selected. This sounds complicated, but it makes it easy to preserve a given order. For example, let’s say you’ve imported items and sorted them by title (in your case this should give the right order) then you can click on the second item to select it; shift-click on the last item to make the selection cover all items but the first one; now drag the whole selection by picking up the second item (the one you selected first) and drop it onto the first item.

Thanks for working on this issue! The method you suggested makes sense; I’ll give that a try in the meantime.

I’ve had some problems recently with the Tabs. We all have different needs. But I started using databases long before most of you were born. I love Tropy because, more or less, it keeps to the KISS principle - Keep It Simple Stupid. PLEASE keep it that way.