Two more questions concerning the relation of an tropy item and the actual file:

will there be a function to automatically rename files using tropy metadata (as in zotero for example)?

how can I display the location/folder of a file, that is listed as an item in tropy?

the answer for the second question is: right click on the picture (and not the item name), then “show photo in folder”

We have not decided whether or not renaming/moving of the original file should be possible from within Tropy. By ‘automatically’ renaming the file, do you mean to rename it whenever the title is changed?

There is also a second way to show the photo in your file system: you can click on the filename in the photo’s metadata (see screenshot below) – this is somewhat subtle at the moment, we have not yet decided how to indicate ‘links’ to the file system visually. 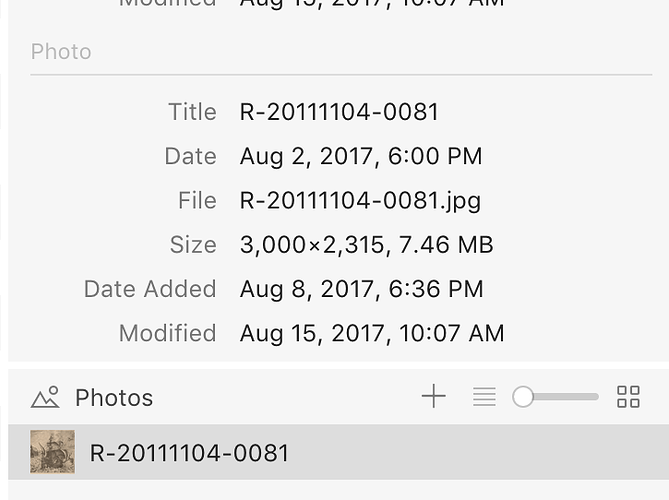 Thank you for your answer(s).
As for renaming, I give an example from zotero (or rather a addon called zotfile): here the file attached to a metadata entry automatically creates a new filename using the basic medadata, for example

Aksenov_1976_On the Problem of the Contemporary State of Russian Painting [1913].pdf

I don’t think the filename changes automatically when the title is changed, but you have the option to click on “rename file” when you changed any metadata

I see – that’s a useful feature, we’ll think about it!

I’d like to put in another vote for this feature!

I use Mendeley as a bibliographic manager and pdf annotator, and I absolutely rely on it to organize and rename the files themselves — not just the metadata.

Not only does this keep my files clean, neat, and easy to find, it also (and this is really crucial) keeps me from having to slow down while capturing texts. I don’t have to worry about finding the precise folder, etc. Rather, I can drop the text into Mendeley and know that it will be properly organized — even if I don’t have time until later to come back and add the proper metadata (Mendeley renames the file anytime I make a change to the document title).

I’ve been trying out Trophy and it certainly has some great capabilities, but this feature is so important to me that it’s likely to be a dealbreaker. I’m a bit of a messy researcher, and I need my software to limit, rather than magnify, the mess I make. (Though I realize this might not be as important to other users.)

With Tropy projects we hope eventually to address two conflicting scenarios: one where you have your photos organized by some external (to Tropy) rules – for example, because you have your own folder structure (perhaps spread across multiple external hard drives) or because you use other software, imposing a proprietary structure, in combination with Tropy to work on your photos – and one where Tropy helps you organize the photos. The second scenario (which would seem more suitable to your needs) is not ready for testing yet, but we’re working on it; it will not make it into 1.1 which is scheduled for the end of the year but hopefully soon after that. I hope Tropy will be a better fit for your workflow then!

Did this second scenario (the ability to rename files based on tropy metadata) ever happen? It would be extremely useful

No, it hasn’t been followed up yet.

Would you want to rename the files based on a single field or were you thinking of a configurable template?

A simple template would be great. Maybe something like: creator/author + “” + title snipped at max of x characters + “” + year if supplied.

Markup changed what I typed. In quotes is an underscore