I attempted to download the Tropy software and it appears Microsoft blocked it as being unsafe.

I suspect you’re referring to WIndows SmartScreen, right? Typically, the binaries should pass the check once they have been downloaded by a sufficient number of users. Can you tell me which version of Tropy you downloaded and from where? I could imagine a warning to be triggered if you downloaded not via tropy.org or the GitHub release page. Alternatively, if you downloaded the 32-bit version (or the arm64 beta version) which we added only recently, it’s possible that there haven’t been sufficient downloads yet.

Finally, we recently renewed Tropy’s certificate used for code-signing. The 1.9 release was signed with the old certificate which has expired now; the signature itself was created before expiry so I think that should be no reason for SmartScreen to complain, but I wouldn’t rule it out. (The 1.10 release signed with the new certificate will be release shortly.)

1.9.0 I was at the main screen and clicked on "Download Tropy for Windows (x64). I received this. “setup-tropy-1.9.0-x64.exe was blocked because it could harm your device”. I use Avast for my security. Could Avast be blocking it? 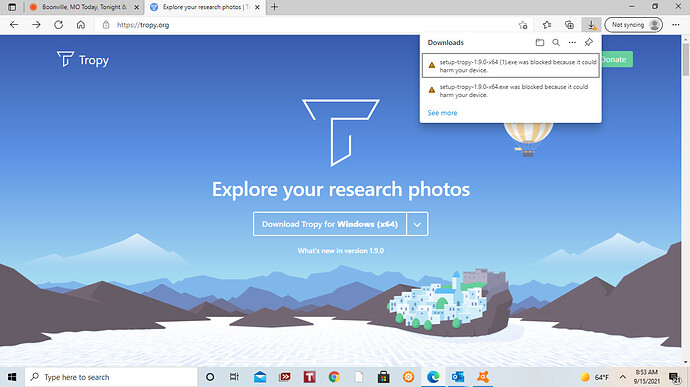 Thanks! This is indeed the SmartScreen warning. I just confirmed that the current beta does not produce this, suggesting that this is because the certificate used for the 1.9 release’s code signature has since expired.

For the time being you can either disregard the warning and keep the file anyway; or if you’d rather wait for the 1.10 release due out in the next few days, which hopefully won’t trigger the SmartScreen warning.

Thanks, we’re gone for two weeks. I’ll try it again when we get back.