I’ve noticed that Tropy 1.4.x has been crashing more often than in the past. It has often been happening upon shutdown. As in I select “Quit”, the program appears to shut down normally, and then I get a “Tropy quit unexpectedly” dialog box.

I don’t seem to have lost photos or metadata when I restart, but I’m concerned. I saved the log reports for two of them now, I can send them in a private message if you like.

And rarely its been crashing while i’m working. it says “something went wrong” soon after I have edited metadata (seems to happen when i do a lot of edits rapidly).

Thanks for your help!

Also in the save dialog box it has come up with these warnings recently: 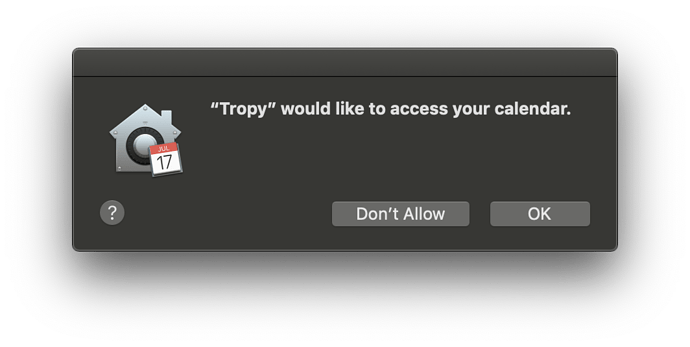 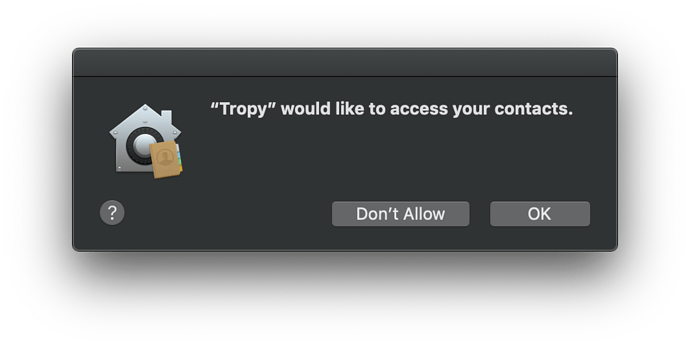 In both cases, I’ve selected “Don’t Allow”, because it doesn’t strike me that Tropy should have access to that data.

I have noticed that Spotlight search doesn’t work correctly inside Tropy anymore, either. It can’t seem to search my files on my external hard drive (where I store all my research photos). Is this related perhaps?

Thanks for reporting this! The log files from the two instances where Tropy crashed might be helpful; also the project file itself (just the .tpy, not the photos) if it would be OK to share it privately, but just the logs might be enough to point us in the right direction.

The same is true for any other intermittent crashes; if you can pass us the log from the crash it we might be able to fix the issue very quickly.

Apologies for the confusing access prompts; I think those happen only on the latest macOS when certain folders are accessed. In Tropy, this might happen, for example because you open the file open dialog (e.g. to import photos). It should be perfectly fine to deny Tropy access (denying access to “Photos” might have the consequence that you won’t be able to browse your Photos.app library via the file dialog from within Tropy). As for the Spotlight search… do you mean the search within the file open dialog? Because that might actually be related to this, though we’d have to research this a little bit. Can you elaborate on the issue so I can try to reproduce it?

You can also read more about the permissions issue with regard to the Atom editor here. Note that Tropy uses Electron which, originally, was the application core of the Atom editor, but this issue should affect all applications on macOS when they access certain directories, it’s not specific to Electron-based applications.

Thanks! logs sent via pm

Yes, re Spotlight, I meant the search within the file open dialog. If i search by filename for any folder on my external HD, it does not find them… this is annoying for consolidating photos in particular (i usually just drag and drop to add)

I noticed this first because all the photos of one particular folder (out of hundreds) mysteriously became delinked from the Tropy database. I don’t know why. It wants me to consolidate each photo one by one. Suggestions?

As for the spotlight issue, I’ll have to experiment with this on a mac myself (it may be related to the permissions).

Consolidation currently only works for one photo at a time unfortunately, but if they are all in a single folder it would be very easy to update the paths with one command in the project db. Would you be interested in trying that instead of going through the photos one by one? (I can also update the path for you if you send me your project file and the path to the folder in question).

The fact that the folder got de-linked in the first place is most likely that the path was changed somehow. If you hover over one of the photo’s file names in Tropy it should show you the full path to where Tropy thinks the photo is; if you compare that to the actual path you might be able to spot the difference (if you’re using a case-sensitive file system this could even just be a difference in upper and lower-case).

Sounds reasonable. Could you give instructions on how to edit the path the project file? That seems like a skill I would like to be able to do myself. If not too much trouble and if you have time.

Thanks for your prompt support!

You can find detailed instructions here and also, somewhat related from earlier today, here. Tropy’s project file is a SQLite database file, so you can open it in SQLite or many compatible database browsers. Please always be sure to keep backup copies if you inspect or modify your project this way!

When photos have been moved, the interesting table is the photos table, specifically the path column (you can try to select path from photos; to see all paths in your project). If paths of many photos change in a simple way (e.g., you move a folder in the path) it is normally very easy to update the paths with a single command as explained in the first link above. Happy to help out if you get stuck! (And again, please make a backup copy, then you’re safe if something goes wrong or if you break something for experiment’s sake!)