Hey Everyone,
I just joined and first want to say how awesome Tropy is. Over the last 6 weeks I’ve put over a thousand document and photographic images into Tropy, tagged the pants out of them, and pulled out all the quotes to go into my latest book into the notes view. It’s going to save me so much time in the long run. But I wondered if there was a way to merge the files with Aeon Timeline using the metadata date (or the date tag I added to each item) to add them?

Any thoughts?
Thanks
K

Can you elaborate on this? I’m not sure if you’re trying to export photos from Tropy into Aeon Timeline (keeping the date assigned in Tropy) or the other way around. I’m afraid that inn both cases, the answer is probably that it isn’t currently possible, but one might be much easier to achieve than the other.

I would love to export from Tropy into Aeon timeline. In my specific case, I have photographed documents, for example old press clippings, that Tropy has allowed me to establish metadata for, including date. I would like to be able to then export that image (or a bulk export of images) into Aeon timeline, and Aeon to use the metadata to place it on the timeline for me.

If I could take that a step further, if I could group items using tabs or metadata, e.g. a for a bulk upload of letters from a specific person, that would be the cherry on top of the icing

OK in this case it depends on how importing data into Aeon Timeline works (I’m afraid that’s out of my jurisdiction), but basically, if you export an item (or multiple items) using the JSON-LD export all the metadata is there so if Aeon Timeline allows you to import photo + date in some fashion, it should be possible to extract all the necessary information from the JSON. Since it looks like Aeon Timeline [will import CSV] files we could set up a custom CSV export plugin that exports the photo paths and dates only. This should be easy to do if you give me a little more information:

I think we’d be able to set up a working solution relatively quickly (albeit with some back and forth and installing a custom plugin) if Aeon Timeline can import photos if you pass it the filenames in a CSV file (of which I’m not completely sure).

The cherry on top of the icing will come with advanced search which we hope to work on after summer.

Hey, Sorry I missed this response… I just decided to come back and post something else when I saw this. I’ll flip this request to Aeon, with your response, to see if this is something they can support. Will get back to you as soon as I hear something.

Here is Aeon timelines response. If you are not familiar with Aeon, each entry on the timeline has a title (e.g. “The Battle of Britain” for which you can then enter a singular date or a date range). That is the title they are asking for. I would assume I could modify the template for metadata to include a “Title” for an archive, right?

I must admit to being very excited that this might be a thing we can do! Let me know if you need Aeon screenshots to see an example of something I manually entered.

From what I can tell from Tropy’s suggestion, they are able to provide you with a csv export of your data that would include the date and the path of the photo on your computer. If this is true, then you would be able to import this data into Aeon Timeline, where you would have an event at the date listed, and the image either as a Image, Link or an Attachment.
However to import csv data into Aeon Timeline, the csv file must contain a column that is imported as the Title of an event. So if Trophy is providing you with a csv export of their data, they will have to provide a “Title” column (or you would have to add one in after).

Once you have the csv file, follow these steps to import your data:

Note that if you do want to convert your images to be embedded in the timeline file, this will increase your timeline file size, so if you have lots of images this might be unfeasible. You are also only allowed one “Image” per event. You can have multiple images as External Links or Attachments though.

Note that if you want to have multiple images per event, then in the csv file the locations just need to be separated by the pipe character (|)

This sounds very reasonable. We can even export multiple photos for an item it seems.

I can prepare a sample CSV export plugin for you that would export for each image:

OK, I’ve added a sample plugin for you. Let’s see how this goes! 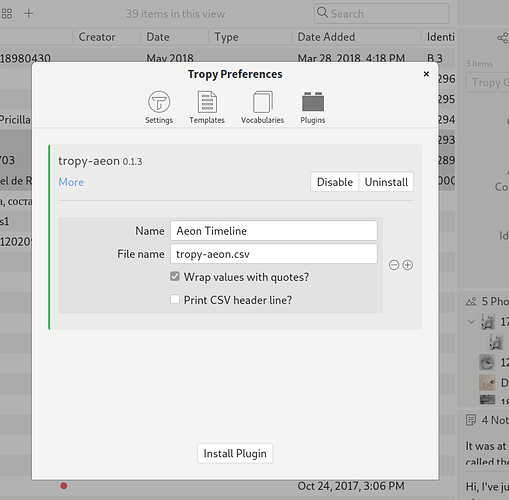 Once saved, check the contents of the CSV file. It should contain your title, date, and all the item’s photos separated using a pipe like Aeon Timeline wants it. If it looks good, try to import into Aeon Timeline.

Right, let me know how that works!

YOU ARE A ROCK STAR!!! Thank you so much. I’ll give it a go and let you know how it works. I can’t publicly talk about the project I am working on just yet, but as soon as I can I am going to shout Tropy’s praises! You are awesome!!

IT WORKED PERFECTLY!!! Seamlessly simple. As I’ve played around with it, I’ve realised it would be super helpful to also pull the ‘AUTHOR’ across too. Would it be difficult to update the plug-in to include that too? It really isn’t a big deal if it’s not possible because this plug-in has already saved me so much time. I can’t thank you enough!!!

Awesome, glad to hear it worked!

Adding additional fields is easy; ideally we would add configuration options that let you define exactly which properties to pick, but for the time being I’ll just add dc:creator as Author to the export, OK?

Ultimately, I think it would be super handy for users to define which properties to pick, but for right now, adding what you suggested works just fine! I can finally see a way to understanding all the information I’ve collated so this process has been invaluable for me!

OK, you can download the latest version of the plugin here.

In the plugin preferences you can just select ‘Install Plugin’ and select the 0.2.0 version; it should install over the previous version (i.e. you don’t need to uninstall first). This one will add author/creator to the export.

All the best with your project!

Sorry to bug you, but I downloaded it and I didn’t get the mapping option to map the “Author” property to a property in Aeon timeline… so it isn’t allowing me to import the csv file into Aeon. Any ideas? It automatically appeared in the first plug-in.
Thanks
K

Let’s see; can you make sure that the Aeon Timeline plugin is indeed version 0.2.0 (the version number is displayed in the plugin preference pane) and use the dc:creator property, showing either ‘Creator’ or ‘Author’ as the label? (The plugin is a bit brittle in that regard, so could easily miss the field if you changed the labels).

Finally, can you take a look at the CSV file (e.g., open it in a text-editor) to make sure it actually contains four fields per line (i.e., there should be a total of three commas on each line like "title","date","creator","links").

Hey there, thank you again!! I’ll give all of the above a try … I’ve discovered that the import works for a small number of files (I just tried 5 at a time and it worked), but doesn’t work for a large import (I tried to import 500 archives.) I’ll play around with it some more and let you know what I find. I’m going to go in batches to see what is constraining it. It could just be a funky entry on my part, or the volume too high, or the fact I have changed between Tropy Generic Metatdata template which has Creator, and Tropy Correspondence which has Author.

I’ll be stopping work for the day shortly but will get back to you tomorrow morning at the latest!
K

Just thought I’d give you a quick update to let you know where I am at… Your plug-in is working great. I’ve had some problems on AEON Timeline’s end. I entered the names in Tropy with a comma… for example, Churchill, Winston. When I imported the file into Aeon, it thought there were two different people, one called Winston and another called Churchill.

I did that for a test sample and imported it into Aeon. It worked, but, in AEON, all “participants” (the people involved in the event on the time) are set up as “entities” (basically just data entry fields for information such as name, date of birth, date of death etc). When you tag someone as a participant, it tells you how old the character was at the time etc. However, when I set the file up, I set all the entities up WITH COMMAS! Which means the imported participant name which doesn’t have a comma, no longer matches the participant that I set up which does have a comma. When the no-comma name landed in the “participant” column, it then created the no-comma name as a new participant. For example, I would now have a participant called “Churchill, Winston” and one called “Churchill Winston”

I’m talking to Aeon about how to fix, and will hopefully have good news soon. Worst case, I have to do some manual editing to fix, and either way, your plug-in has already saved me so much time that I’ll still be better off.

(As an author, there is irony that a comma is causing such a problem!)

UPDATE: Aeon are sending me a beta version with a fix for the commas. They think they’ll have it to me over the weekend. I’ll import the files as soon as the beta is ready. I think they’re excited about the link between the two applications so are happy to help now they understand the value a little better. Will let you know how it goes.

Sounds great, thanks for the updates!

Hi, and thanks for a wonderful product. I’m still feeling my way, but already it’s proving amazingly useful.
Like Karen, I would like to link to Aeon Timeline (which I only discovered thanks to Karen’s post).
I have tried to follow your instructions and get as far as ‘Install Plugin’ but that just takes me back to the Download page in Finder (I am using a Mac).
What am I doing wrong please?