Photos seem to have gone missing

Hello – I was using Tropy rather intensely in February and was just getting ready to get back to it. But my photos seem to have disappeared. As the screenshot below shows, the data I entered into Tropy remains, as does a thumbnail of the photo. But the photo itself is gone. I still have the originals on my desktop. How can I fix this without losing all the data I’ve already entered, and how can I prevent it from happening again?

ETA: I didn’t realize this had been discussed previously, but I think what’s happened is that I renamed the folder with the photos in it on my desktop and now I can’t remember the precise name that the file was before. If I can’t remember, is there any way to fix this problem? 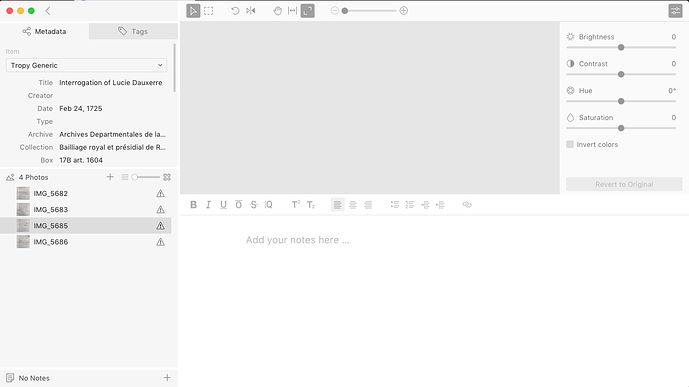 This is an area of Tropy we want to improve, by making projects more portable; at the moment it is not possible to easily adjust all file paths within Tropy; you would have to adjust each photo individually by right-clicking on the photo, selecting Consolidate Photo and picking the photo from its new location.

Obviously this is not feasible if you’re working with more than just a handful of photos.

Having said that, if you changed the location of your photos in a uniform way (e.g., moved all the photos to a different folder or, as you say, just renamed the folder) it is very easy to fix the paths in your project file with a single database command. I posted detailed instructions in another thread; in your case you would also need to remember the original (or old) path of your photos. One way of doing that would be to open the database file (step 4 in posted instructions) and then issue the following command at the prompt: select path from photos; to print all the paths in currently set in your Tropy project. This would show you what the original path was. You would then issue the update command as described.

You seem to be using macOS where sqlite3 is already installed; if you try this out, please don’t forget to make a backup copy of your project file in case anything goes wrong. Alternatively, I’m happy to make the change for you if you post your project file here (or send it tome at sylvester.keil@gmail.com); additionally I would need to know the full current path to your photos.

Thank you! This should fix it. I appreciate the prompt response!

Hi, I’m not super tech-savvy so I don’t really understand the path of the photos. My photos were there and available two days ago, and now most of my photos show up like the photo above. I have backup copies of my photos, but since they aren’t categorized and searchable like they are in Tropy, it’s a pain to go back through my 1700 photos to find the part of each article that I’m missing. Can you help me figure out how to fix this?

If a photo does not load in the image viewer and the little exclamation mark icon shows up, this means the photo is not at the location from where it was imported originally (this might happen if you moved or renamed the photo or any of the folders in the photo’s path). Since you still have your photos we need to either move them to where Tropy expects them or update Tropy’s database with the new location. To help you fix this, can you tell me:

For the last part, you can do this from within Tropy. Select one of the ‘missing’ photos; n the metadata panel find the ‘Photo’ section and look for the ‘File’ entry:

When you click on the filename, Tropy should open your file manager at the location where it expects to find the photo; here you could check that the file with the given filename actually exists. Now, since Tropy can’t find your photo, I’m assuming the location does not exist anymore, so the file manager won’t open at the place. If you have already updated Tropy to version 1.3 you can also place the mouse pointer on the filename and a tool tip showing the full path should show up – again, this is the path where Tropy thinks your picture is located. In order to fix the issue we need to either move all the photo files back to this location or update the paths to the new location.

I’m using Mac Sierra 10.12.6
All photos are affected, the only thing I have access to is the image of the thumbnail but once I click on it it’s no longer there
They were all in one place but I moved some of them to lists from the overall project folder inside of tropy. They haven’t been moved from my images at all on iphoto 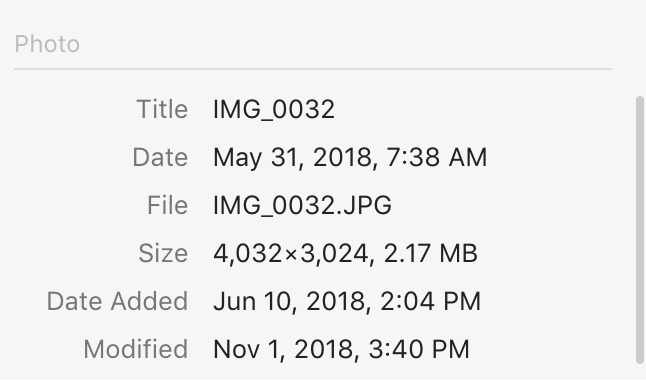 When you move the mouse over the filename ‘IMG_0032.JPG’ it should show you the full path to the file; if you click on the file Finder should open in the respective folder. You need to check what the full path is and whether or not the file still exists at this path; if it does not, the next question is where it is now.

Do my files have to forever live at the location where I had them when I first started using Tropy? Are there any instructions for changing the photo paths en masse when I do want to move the photo folders elsewhere? Thanks!

Currently, the easiest way to move your photos (provided you want to move them all together and not to different locations) is to turn your project into a portable project like this:

You can also open your project file with SQLite and change photo paths in bulk as described here and above in this thread.